Juul: the Misused Tool to Quit Smoking, Now the Gateway 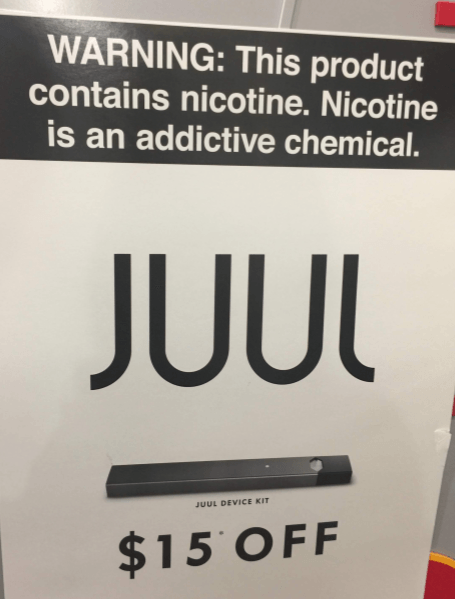 Today’s children grow up recognizing the traditional cigarette as bad, or at least a harmful thing that they should not try, but the same cannot be said for a Juul. This seemingly harmless object is intriguingly modern and sleek, presenting a design particularly intriguing to this technological era. When children cannot distinguish the object as harmful, they are interested and, soon, hooked. After all, how much harm can come from such a small item?
What exactly is a Juul?
A Juul is a new electronic smoking device that can “heat up a cartridge containing oils to create vapor.” A single hit of a Juul creates a relatively small amount of vapor compared to other e-cigarettes, like Vapes, and this vapor evaporates more quickly than other devices as well. Thus, allowing for very discreet smoking opportunities, which is ideal for secretive minors. The Juul only works with an added Juul pod, which contains about 0.7 ml of juice. A single Juul pod contains about 50- 59 mg of nicotine per mL of liquid, making the small pod have a nicotine content equivalent to that of an entire pack of cigarettes. This high quantity of nicotine gets users addicted very quickly, and before one knows it, they are buying more Juul pods.
A common excuse for minors use of an e-cigarette is that it is safer than the traditional cigarette or “is only water vapor,” but this is clearly not true. In the first place, it is entirely impossible to smoke 100% water vapor, as pure water cannot burn. Secondly, as mentioned prior, a single Juul pod is the equivalent to an entire pack of cigarettes, proving there is no way a Juul can be safer. Nurse Practitioner, Andy Files questions the idea that Juuls are safer than cigarettes, “I think the problem is that anytime we put anything into our lungs, our lung is such a sensitive tissue, it causes so much harm to our lungs. We are finding now that vaping devices are leading to new types of lung disease like popcorn lung.” When asking the medical professional why young adults should stray from things like Juuls and Vapes, Andy answered with, “I would say that it is just overall not healthy behavior and we don’t know enough about them right now to determine the long term effects of them. When people first started smoking cigarettes they had no idea the risk and now smoking cigarettes is the #1 modifiable risk factor for a large portion of our chronic health problems and early deaths in this country. So, smoking any type of device is a huge gamble for your health.”
So if we know Juuling puts us in health risks, then why is it so popular?
When recording a survey amongst the FHS student body, there were a remarkable 547 responses.  Out of 539 students, 139 students said they smoked, yet, 90 of the 139 said that they were not willing to stop smoking. While each person may have their own reason for stubbornly holding on to their smoking habits, there must be a reason why students wouldn’t want to abandon their Juuls. The habit is difficult to kick due to the addictive nature of nicotine but is likely, also, influenced by the trendiness of smoking amongst today’s culture. Juul pods come in flavors very appealing to youthful taste buds, in flavors like blue raspberry, mango, and fruit. The company also advertises with modern design and youthful looking models/actors. Adults like to blame this generation for the stupidity of Juuling, but how are teens supposed to ignore a product entirely ideal for them?
It is typical for adults to encourage teenagers to stop smoking, as there are many possible repercussions. Healthwise, one’s brain changes after being introduced to nicotine, making the individual much more like to become addicted. Discipline wise, on first offense the device will be confiscated, on second offense the possessor will have to attend an educational program. FHS wise, if caught with a product, the student will receive 2 days of ISS. Without promoting the use of these products, the repercussions for using them are fairly insignificant, which can explain a reason why so many are choosing to take a hit.